The FSM Theory ...the cause or the effect?

It is a common belief that spanish moss kills trees but many studies however, indicate that the plant is not parasitic but can sometimes

damage the host tree by over-shading the leaves, thus reducing photosynthesis, or by weighing down and breaking the branches.

Here at FSM we have always found it curious that while we do not believe that spanish moss kill trees, the volume of moss on a healthy oak tree does seem to be significantly more where branches are dead and a dead tree always seem to have more moss than a live one.

What then is the cause and effect? In the case of the healthy tree, did the moss increase in sufficient volume to block the light resulting in the branch dying? Why then one branch and not the entire tree?

Spanish Moss tend to favor trees that have high rates of foliar mineral leaching -- Calcium (Ca), Magnesium (Mg), Potassium (K), Nitrogen (N) and Phosphoprous (P) -- providing an abundant supply of nutrients to the plant. For this reason the plant seems to show a preference of growth on southern live oak and bald cypress because of these trees' high rates of foliar leaching.

One day on a cloudy day, while sitting in my family room sipping a glass of wine, I witnessed a lightning strike of an oak tree in my back yard. To say it was a frightening experience would be an understatement... the content of my wine glass ended up 6 feet away, about the same distance our cat, who was asleep on the back of the sofa, leapt when the tree was hit. I saw smoke, leaves flying and a split bark from top to bottom... it was scary indeed.

The tree, which was a healthy oak tree died and over the weeks and months I noticed something; it was full of spanish moss. Significantly more than was there originally. It was obvious that the moss did not kill the tree and it was even more obvious that the propagation of the moss increased after the tree was struck by lightning. 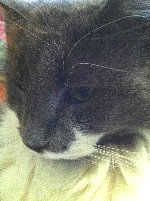 The FSM theory: spanish moss grows in more abundance on dying trees or branches because there are higher rates of foliar mineral leaching of nutrients as the tree dies.

This is only a theory. We highly encourage a young bright college researcher to validate this theory as a project.

In Loving Memory of O'Malley

1. Shipping calculated in Shopping Cart
(ground rates applicable to 48 contiguous states only)
2. Weights above are for moss only. Actual Shipping weights are more.