Common questions about Spanish Moss... How long does it grow?

How long does Spanish moss grow is not a simple question. The cascading lengths of spanish moss seen on trees are really a mat of many entangled spanish moss strands. Spanish Moss will naturally tangle because of the scales on each tendril. It is unavoidable.

A single strand will generally continue to sprout offshoots if left to grow in ideal circumstances, but in reality, those offshoots will begin to tangle with each other. Over time, the entangled strands become a mat of live and dead spanish moss, as the innermost strands die because of lack of light and air. The strands on the fringes continue growing, creating that cascading soft feathery look of new tendrils hanging from a fatter cluster of moss.

The moss that is shipped will naturally be tangled during packaging. So, not only will you get the flowing soft tendrils of the newer growth, but the same general effect of long cascading spanish moss can be created by devoting some time and creativity in creating different lengths of moss.

A Spanish moss grows on trees, but it does not put roots in the tree, nor does it take nutrients from it. The plant thrives on rain and fog, sunlight, and airborne or waterborne dust and debris.

The surface of Spanish moss is covered with tiny gray scales that trap water until the plant can absorb it. The plant's tissues can hold more water than the plant needs to keep it through dry periods. When the tissues plump up after a rain, Spanish moss appears more green. As the water is used, it returns to a gray hue.

4. What is the quickest way to propagate?

Spanish moss is more likely to propagate by fragmented pieces of plant called festoons. When a festoon is broken off and carried by wind or birds, it will begin to grow if it lands in an acceptable place. See Growing Spanish Moss 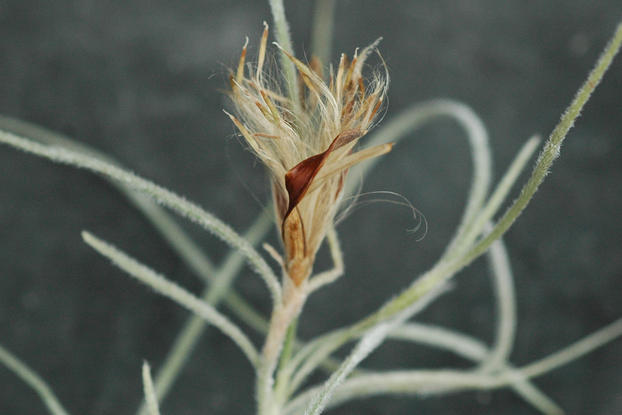 5. How do the seeds travel?

Spanish Moss seeds have feathery appendages like dandelion seeds that allow them to float through the air to other habitats.

It has been said that Native Americans told French explorers that the plant was called Itla-okla, which meant "tree hair". The French were reminded of the Spanish conquistadors' long beards, so they called it Barbe Espagnol, or "Spanish Beard". The Spaniards got back at them by calling the plant Cabello Frances, or "French Hair". The French name won out, and as time went by Spanish Beard changed to Spanish moss.

1. Shipping calculated in Shopping Cart
(ground rates applicable to 48 contiguous states only)
2. Weights above are for moss only. Actual Shipping weights are more.